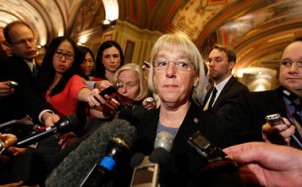 Trust us, there will be no pukka solution from the Super Committee!

With media being garrulous on the Super Committee and the upcoming “deadline,” we began to wonder, do the American people as a whole buy it?  We hope not.  Surely the credulity of the American people, at least when it comes to believing the current Congress will solve problems, has waned.

No one actually believes the Super Committee will arrive at some bargain for deficit reduction, do they?  Everyone knows it is a convenient Stargate for Congress to jump through to get themselves out of the latest deficit/debt ceiling conflict.  As far as a group, the SC is but a newly created federal caste.  The SC concept was just another disguise for kicking tough issues down the road.  Prior to creating the so-called Super Committee, Congress already had 40 permanent committees plus dozens and dozens of sub-committees.  There will be no agreement from the SC and we easily predict that there will be nothing either side of Congress to vote on.  Thus, the dreaded sequestration will supposedly happen next year during the next Congress and next Presidential administration–not now!

Speaking of sequestration, apparently there are those who believe it will never happen.   The next Congress will likely kill the sequestration triggers through new legislation.  In fact, Senator Lindsay Graham has already made it clear that he will not allow the Defence Department to suffer the “massive” cuts that sequestration calls for.
Speaking to Chris Wallace on Fox News Sunday, Graham has said:

On the other hand, on Saturday, November 19th radio talk show host, Larry Kudlow repeatedly proclaimed on the air that it would be a devastation to the stock market, jobs, and the economy if Congress did anything to stop sequestration.  He said, the market will take a dive.  Kudlow believes that if Congress does anything to stop the future automatic cuts,  the credibility in the U.S. will further decrease world wide.  On the other hand, Kudlow prefers sequestration over any increase in taxes whatsoever.  It kind of makes you wonder what Kudlow’s actual conservative position is on defence, eh?

This whole concept of the SC solving our federal budget problem is but a political ploy for both sides to use to point the finger at each other.  How convenient it is for the American people to forget that the Senate is charged with the responsibility of preparing a federal budget each year but it continues to be guilty of malfeasance as a whole!  Where is the federal budget?  Well past two years without one.