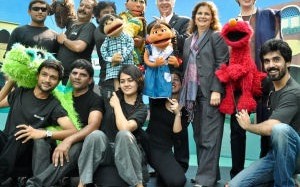 The U.S. is on top of its foreign policy, foreign aid game don’t you think?  We get it that most people don’t care enough to think or speak about issues; much less take any action.  However, we continue to be outraged by the epic stupidity of how our government spends our money.  We, the American people are going to pay about $20.00 per person to “produce” a muppet show for Pakistan children.  Another stellar investment in foreign policy from the Obama administration.  It’s only a few bucks more than the cost of a Department of Justice muffin so, what’s the big deal you might ask.  It’s a 20 million dollar big deal!  Obama is the Cookie Monster.  1.5 billion per year for five years in NON military aid to Pakistan.  The USAID agency has already sent more than 5 billion to Pakistan since 2002. Feels good, right?  In any event, we’re asking all the protesters currently occupying Wall Street to go to Sesame Street and protest the waste of 20 million in taxpayer dollars.  We’ll meet them at the corner of Big Bird avenue and the Cookie Monster garbage can.

Let’s start at the most recent beginning.  John Kerry (Democrat – Massachusetts) is the Chairman of the Foreign Relations Committee in the Senate.  He, and a group of mostly Liberal Senators came up with the brilliant idea of sending billions of taxpayer dollars to Pakistan back in 2008.  Ultimately, this idea became the Enhanced Partnership with Pakistan Act (catchy name).  In 2009, Obama signed the Act into law.  Now, none of us know why this USAID to Pakistan is important to the average U.S. citizen, nor do we know why the government thinks we should go in debt to give Pakistan money.  Nonetheless, we’re stuck with the debt because we allow it to happen.  With respect to the Muppets and Sesame Street, a salient portion of the statement of principles of the “Act” is:

to support the strengthening of core curricula and the quality of schools across Pakistan, including madrassas, in order to improve the prospects for Pakistani children’s futures and eliminate incitements to violence and intolerance;

Clear as mud right. The idea is that if we pay 20 million for the production of a series of episodes of Sesame Street and broadcast same over the state run television network in Pakistan, we will be able to strengthen the children of Pakistan’s core values such that they will, when they become adults, not turn to violence (jihad?) to solve problems. Twenty years from now they will remember Sesame Street with fondness and not hate the U.S. or its people. Make sense?  How does this stuff happen?

Apparently, once the Enhanced Partnership with Pakistan Act was passed, the allocation of how to spend all this taxpayer money is passed to the “independent” government agency, USAID.  That agency has a “department” or division so to speak called USAID to Pakistan.  The head of the USAID agency is Dr. Rajiv Shah.  Shown here is a photo with him and our Veep, Joe Biden celebrating 50 years of giving our money to others.  The big shot brilliant beaurocrat in charge of the 1.5 billion per year earmarked for Pakistan is Andrew Sisson.  Ostensibly, he get’s to decide how to waste the money.  Wish I had his job.  If I had his job, I would probably get confused and end up sending the money to defend the U.S. border with Mexistan.  Upon his arrival more than a year ago in Islamabad, his message on his mission for Pakistan includes the following platitude:

I am looking forward to working in partnership with the Government of Pakistan, local organizations, as well as our international partners to make sure that the assistance from the American people to the people of Pakistan is delivered in the most transparent, accountable, and effective manner.

The organization receiving the 20 million to “produce” the muppet show is Rafi Peer Theater Workshop.  The website lists the organization’s major productions–but none since 1996.  However, the Radi Peer group has been instrumental in establishing an international muppet museum in the event anyone is interested.

So, here are just a few thoughts about this investment in international relations with Pakistan.  We have already given Pakistan billions of dollars in aid.  How’s that been working for us?  Seventy percent of the people of Pakistan don’t like the U.S. but perhaps a muppet show will turn that around?  Not sure why anyone here cares though.   Why are we sending our money to a country that dislikes us, especially now?  Assuming for the sake of argument that showing a muppet television show to the children (lots of re-runs included we suppose), are the parents of these children going to allow them to watch the show?  Some people may disagree, but we think this is pathetic and only serves as another example why a growing number of Americans are “angry” at the government and its incesent monstrous appetite for cookies.  “Me want cookie!”