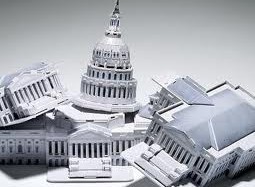 More evidence that Congress is broken…

More than a year ago, we posted our first article on the issue of lame duck congressional actions, titled Shoot the Lame Duck!.  The post opines how ridiculous and damaging it is to have members of Congress voted out of office hanging around after being defeated in the November election.  It also provides a historical summary of the 20th Amendment and how the Amendment has in effect been turned on its head by Congress.  The 20th Amendment calls of the newly elected Congress to begin on January 3rd (unless some other day in the new year is appointed by law).  During this two month “session” between the November elections and January, the Lame Duck is indeed in session.  That’s when outgoing members of Congress are fired, but hang around as paid obstructionist while packing to leave.  A couple examples were discussed here.  This lame duck legislative opportunity for fired members of Congress needs to be eliminated.

On January 1, 2011 we posted a follow up article on this issue reviewing a piece of legislation.  Congresswoman Lynn Jenkins (R-KS) had introduced a bill in Congress–End the Lame Duck Act.  Although we don’t fully agree with the solutions offered in the bill, it is certainly better than no action whatsoever.

Here’s where the Congress is broken argument comes in.  The following is but one of hundreds of examples that Congress is broken.  Perhaps, Governor Perry is right on target when he states that Congress should be overhauled completely.  In any event, the above referenced Jenkins legislation was introduced in July, 2010 (four months before the November election and 6 months prior to a new Congress would take over).   Bear in mind, this was during the last few months of the democratically controlled House of Representatives.  Makes us wonder, why did she bother introducing legislation during this period of time.  Was there any chance at all that her bill, End the Lame Duck Act, would actually be taken up or acted upon in a legislative committee controlled by democrats?  Govtrac.us offers a clear and simple explanation of what a congressional committee is:

Committees are like “mini Congresses”. Most bills begin by being considered by one or several congressional committees which may “report” the bill favorably or unfavorably to the Senate or House as a whole allowing it to receive consideration by the full body and move forward, or may fail to consider a bill at all preventing the bill from moving forward. Most bills never receive any committee consideration and are never reported out. House bills start in House committees and enter Senate committees only after being passed by the House and received by the Senate, and similarly for Senate bills.

So, if the Jenkins Bill was not passed by both houses of Congress during the 6 remaining months of the 111th Congress (2010-2011) it is dead and would have to be reintroduced again in the subsequent 112th Congress (2011-2012).  Which is exactly what happened of course.  It appears that the Jenkins Bill, a piece of legislation introduced by a Republican during a time that the House was controlled by a democratic majority, was buried in committee for six months.  How productive is that?  Moreover, because the Bill was dead at the end of the 111th Congress, ostensibly the Bill not only has to be reintroduced but it is sent to the appropriate committee(s) again.  After all, there are now newly elected members sitting on these committees.

An excellent explanation of the difficult, convoluted, and complicated process of getting any proposed piece of legislation voted on in the House of Representatives for example is articulated at Congresswoman Lynn Jenkins website.

Congresswoman Jenkins did reintroduce the legislation on January 19, 2011.  It is now H.R. 339 and was referred to the two appropriate committees in January of this year (eleven months ago).  From what we can tell, no action has been taken on the legislation yet we are but one year away from witnessing another Lame Duck session of Congress which will follow the November 2012 elections, unless some version of the H.R. 339 is passed by Congress and signed into law by Obama.  H.R. 339 has twenty-six (26) cosponsors.  You would think with that many members of the House cosponsoring the legislation, the leadership of the committee(s) could be persuaded to generate a report and vote within eleven months (11) of having had Bill in committee.   We think the goal here is to vote on this important piece of legislation.

We recently wrote Congresswoman Jenkins (R-KS) about H.R. 339 and the relevant portion of her response is as follows:

To help hold Congress more accountable, I have reintroduced H.R. 339, the End the Lame Duck Act. This legislation will adjourn the House of Representatives on the day of the general election eliminating the possibility of a lame duck session. Congress functions best when it is accountable to the American people. My bill would put an end to the underhanded “Lame Duck” tactic. Never again could a lame duck session be used to attempt to pass destructive legislation like card check, amnesty for illegal aliens, the Freedom of Choice Act (FOCA), or cap-and-trade.

Today, we responded to her reply and have requested the specifics of her action plan to force H.R. 339 out of committee and move it along toward a vote in the House.  Assuming  we will receive an update, we look forward to following the progress of this legislation.

We encourage you to contact committee members, or your House Representative to encourage them to support this important legislation.