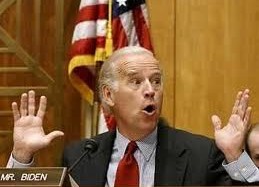 Say it ain’t so, Joe!  The fact that VP Biden is campaigning now (OBama has apparently given him permission to speak) is scary enough.  The fact that he recently selected an elementary school as a campaign “stop” is dumb and weird.  However that is not what I would necessarily call “shameful.” See below.

As reported in an article written October 18th by Sari Heidenreich for PoliticsPA, VP Biden stopped at the Goode Elementary School to advocate grade schoolers for passage of a portion of the American Jobs Act (Oxymoronic name)!  What?  Biden is at an elementary school campaigning for relection (not many voters in the audience Joe.) and advocating to elementary grade students that a portion of Obama’s proposed legislation should be passed by Congress.  Uh?  I don’t know how about you but that is both dumb and weird.  Getting close to what I call shameless, almost but not there yet.

Biden’s shamefullness is revealed by a different article October 18th in U.S. Today.  It is reported there that Biden visited the fourth grade class.  As he strolled around the fourth grade classroom he told the students about his dog, his golf game, and daily meetings for hours with the President.   Sure Joe, we believe that.  Remember, though, this is a fourth grade audience.

Biden steered the conversation toward the jobs act, too, telling the students that Goode used to have more teachers working there but they were laid off because there wasn’t enough money for them.

Thank you Veep for laying that stress on fourth graders.  However, we know you had the solution Joe because after all you are the Veep. Biden told the fourth graders,

We think the federal government should say to cities and states, we’re going to give you money … to hire them back,

Hey Joe, did you go ahead and tell the fourth graders that the federal government is broke and that the fact that it is broke doesn’t matter cause we can just borrow more money  from China? He did tell the students

that people who have more money could pay “a little more” in taxes to bring back those jobs. Someone who makes $1 million would pay about $500 more each year.  If they pay a little more in taxes, they can pay for all the teachers, all the firemen” who lost their jobs,

And, if they pay more they can pay for all the teachers and firemen who lost their jobs!

Only a shameful politician campaigns to fourth graders to begin with, much worse using fear tactics, lies, deception, and irresponsible rhetoric. Yes, Joe, you are such the great campaigner.

After posting this article yesterday, I came across a blog post by Tiffany Gabbay writing for The Blaze.