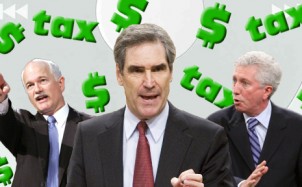 What? An iPod tax–what is that?  Listen to the radio ad below.  As a part of an attempt to modernize federal copyrights laws, Conservative Canadian lawmakers introduced C-32 Copyright Modernization Act.  The opposition put forth a motion to include in the new legislation, a tax of digital media.  Digital media for the purposes of the liberal agenda would include a device that could record and play media i.e., smart phones, mp3 players, iPhones, iPads, and iPods.  The tax in the form of a levy on the sale of the device would depend on the amount of storage the device had:

At the point of purchase, Canadian consumers would pay the levy as a hidden part of the purchase price.

American independents and conservatives, i.e., tea party advocates, and republicans, should hope that the left-wing liberals in the U.S. never look North for more crazy over-the-top tax ideas.  We hope that the liberals in the U.S. never associate with the Liberals, NDP, or the Bloc Québécois in Canada.  Those three political parties are the general force of opposition to the Conservatives, the current party in power today.  Prime Minister Harper is the head of the Conservative Party.

We happen to believe that the proposed iPod tax is generally over the top radical; it is also one of the dumbest things a government could do to stifle consumer spending in rough economic times.

The Canadian government website reports that the opposition coalition proposed the iPod tax back in April 2010:

On April 14, 2010, the House adopted the Standing Committee’s recommendation, with all three opposition parties supporting the motion and the government alone in voting against it.

Later, the Harper government legislatures proposed an amendment to take the opposition’s attempt at a iPod tax out of the language:

Bill C-32, An Act to amend the Copyright Act (Copyright Modernization Act), was introduced by the government in the House of Commons on June 2, 2010, and is currently being considered by the Legislative Committee on Bill C-32. This bill does not propose an extension of the private copying regime. Furthermore, the government does not support an extension of the levy, as it would force consumers to pay a higher price for their devices and would send the wrong message on piracy by placing a price on it.

In full damage control, the Liberals are now trying to hide their support for the iPod tax, but their actions and words prove they support the tax,” said Conservative spokesperson Fred DeLorey. “They not only said they were in favour of this ridiculous tax, they also voted for it. There’s no way around it.

The LIberals response at the time in April 2010 was:

The above argument reminds us of the court battle on Obamacare.  While being advocated in Congress, the fine for not purchasing the mandatory insurance was referred to as a “penalty.”  Now, in federal court, Obama argues, “it’s not a penalty, its a tax.”

This past December, the Harper posted the following on its website:

On December 14, 2010, the official government website posted the history of this issue and includes the following:

We are here to confirm that the Harper Government will not bring in an iPod tax as part of its copyright legislation. The iPod Tax has been proposed and supported by all opposition parties.

The Canadian government has a long history of creative taxes and currently taxes most anything you can purchase in goods and services; and sometimes twice (resale of used cars for example).  Trust us when we say, this is a solid conservative stance by Harper and his Conservative Party against a tax and spend opposition coalition.  We sent them a kudos.