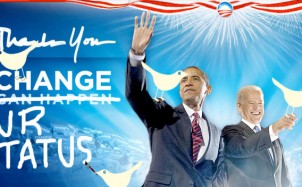 Obama pioneered its use to enhance his election chances, to advance his liberal ideology, to pander to the “youth vote” in the 2008 election, and to now espouse well crafted rhetoric via tweet links.  We as citizens can also use Twitter to hold elected officials more accountable. Today, we at Balloun Post decided it was time to “follow” Obama on Twitter for the important purpose of seeing his social network methods, the liberal agenda, and to better our position to respond as a voice for individual rights in opposition.

Today Obama provided us a perfect example of how he uses Twitter to espouse well crafted rhetoric and to appear as the all wise savior to his uninformed and naive citizenry. The Obama tweet today is: “Small businesses and families are tightening their belts. Their government should too.” The tweet is of course tagged with a video link.  The thinking is that we click the link and receive our daily portion of the truth on whatever particular issue of the day that needs to be campaigned upon.  Like old-time hard-core pushy salesman of the past who worked by the axiom of “always be closing,” Obama works daily from the axiom, “always be campaigning.”  So, in true form, most of the video is dedicated to his campaigning but toward the end, Obama announces he is “proposing” (whatever that might mean today) a two year freeze on all non-military federal employees.  This is presented in the context of being an enlightened idea that has only recently become necessary because small businesses and families are now tightening their belts.  Really?  Mr. President, where have you been for the last two years?  Regardless of how “johnny-come-lately” the freeze on wages for federal employees is, there are important hidden truths behind the scenes the average citizen is unaware of.

Mr. President, why does your proposal not include all the federal court employees?  Earlier I said Twitter might be a tool to assist in holding politicians more accountable.  Well, in response to Obama’s tweet, we sent a “reply tweet” asking him the aforementioned question.

Watch the pea, the shell game continues.  We’re the “mark.”

Despite the truth, Obama does not tell us that his proposal (he wants it to be effective January 1st, 2011) has to be approved by THIS Congress in order for that freeze to happen.3  Which Congress did you ask?  The Harry Reid (D-Nev), Nancy Polosi (D-Ca) led Congress a/k/a the Lame Duck Session. Here’s yet another example of Obama’s brilliant campaigning going on all the time. So, if the Lame Duck Congress (see our previous post) does not approve his pay freeze proposal within the next few days, then it will be there for the next Congress which begins it session later in January. It matters not to Obama that there is insufficient time remaining in the lame duck session for the American public to actually become fully informed of the last minute stuff this Congress is trying to quickly and quietly shove down our legislated throats.  Obama will then have the campaign canon fauder of saying, “I proposed spending cuts but Congress failed to act.” By the time that campaign rhetoric is said and tweeted, Obama knows the voters will have forgotten it was a last minute proposal given to his lame duck Congress.  The proposal of freezing pay for federal employees should not have to be a major complicated piece of legislation, but we’re betting it will become complicated by Reid and Polosi through the amendment process and thereby not get voted on anyway.

Maybe every elected official in Canada and the United States should be required to be on Twitter, whether by formal promulgation or simply by pressure from their constituencies. Here’s why that might be a good idea.  Once your elected official is logged into Twitter, the Twitter question is there; “What are you doing?”  I can’t think of a better question for a politician to answer on a daily basis.   A politician might argue that in order for it to be fair and not overly burdensome, the elected official should only be required to accept “followers” that reside either in their state or perhaps their district.  If limited to just their district, they could receive queries from people who voted for them or against them.   Aren’t these the folks that the officials should answer to on an on-going real time basis?On the other hand, for example if you’re an elected U.S. Senator perhaps you should be followed by anyone in the entire state that wants you to answer that question, “What ARE YOU Doing?”  Moreover, a follower could simply ask the question; Ms Polosi, what is your voting position on Obama’s proposal to freeze federal employee pay for two years?