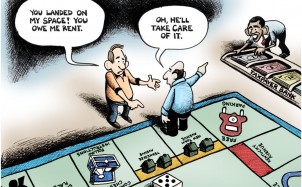 What is the federal debt limit?

Money for federal debt is raised by the Treasury (like by the IRS).  The amount of debt the country can incur in total is limited by Congress.  However, each time the limit is reached (each year the credit card is pretty much maxed-out) Congress either has to approve of a new debt ceiling, or all kinds of bad things happen–spending stops somewhere within the branches of government in order for the government to meet it’s various debt obligations.  The founding fathers of the Constitution believed this would be an important component of the checks and balances between the three branches of government.  We all know that the historical pattern of Congressional behavior is to simply “increase the debt ceiling” and borrow more money.

We are beginning a new era in our Government.  The national debt, which has so long been a burden on the Treasury, will be finally discharged in the course of the ensuring year. . . I can not too strongly urge the necessity of a rigid economy and an inflexible determination not to enlarge the income beyond the real necessities of Government and not to increase the wants of the Government by unnecessary and profuse expenditures.  —Andrew Jackson –President 1834

The total government debt ceiling is of course tied to the annual federal budget.  Simply put, it works like this.  If an American family decides that its total debt will not exceed $100,000 regardless of the sources of debt (car loan, mortgage, credit card etc) but your 2011 planned family budget (how much you plan on spending next year without having the income to support an excess) will cause the total family debt to grow to $101,000 during 2011, a decision must be made.  Obviously, in some families, a legislative session must take place to decide on either raising the debt ceiling or perhaps cutting the planned vacation in order to stay under the debt ceiling.  In other families a single individual may decide to spend the money regardless of the long-term consequences for the family.  Sound familiar?Would you like to guess how many times since 1940 Congress chose to increase the federal debt ceiling as opposed to cutting spending to stay under the then existing debt ceiling amount?  Okay, I’ll give you the answer at the bottom of the page.  Hint:  In 1940 the total debt limit was $43 billion.  Seventy years (70) later, the debt limit is now two hundred ninety times higher (291) than the original amount, i.e. $14.3 trillion currently (but the actual debt is $13.7 trillion and growing exponentially by the minute–at a rate of $5 billion per day)2

In 1974, Congress passed a law which required it to formulate a budget by April 15th each year and pass a budget within thirty days, no later than May 15th.  Obviously, if Congress formulates a budget (considering the budget proposal that Obama will advocate) that will require the government to borrow more money therein exceeding the current debt ceiling, Congress will have to pass legislation increasing the debt limit again in order to pass an increased deficit spending budget.  Get the picture?  By now, you should be thinking.  If we can’t force Obama and/or Congress to make decisions on where to cut spending, we must insist that the total debt ceiling be reduced–not increased.  If Congress can not increase the borrowing, someone will have to cut spending somewhere.  At this point, is there any area of the federal government that could not stand a little reduction in spending?  We don’t think so.

Just a few weeks ago, the Obama Debt Reduction Commission released its summary results.  The document caused all kinds of controversial discussion amongst the Washington politicians because of the various recommendations the report would include.  Obama refused to comment on the summary until the Commission issues its final report sometime before the end of the year.  Alan Simpson, a former Republican senator and co-chairman of the president’s commission, told reporters gathered for a breakfast discussion hosted by the Christian Science Monitor. “The bloodbath (in April 2011) will be extraordinary.” Simpson went on to predict: “The debt limit, when it comes in April or May, will prove who is a hero and who is a jerk and who is a charlatan.”  Simpson opines that we, the taxpayers, will see who the real Tea Party folks are, and who are not.  Todd Gillman, Dallas Morning News agrees.

“By year’s end, America’s debt will represent sixty-two (62%) percent of the nation’s economy finally eclipsing the previous all time high that was reached by FDR during World War II.” Beck, Glenn., Broke, p75.

Answer to question above:  Since 1940 Congress has increased the debt ceiling 99 times and only rejected an increase once; in 1995 causing a notable incident of a partial governmental shutdown.  Would that be a bad thing?