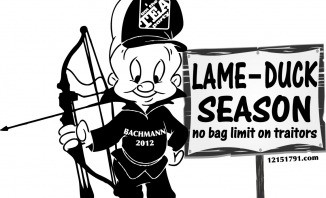 When you’re fired, you pack your stuff and leave!

If you’ve ever fired an employee, or have been fired yourself, you know that the terminated employee packs his stuff and leaves–usually rather quickly.  If you’re the employer you certainly don’t fire someone and then allow them to hang around for two or three weeks as an employee in a “lame duck session.”  Obviously this especially applies to any “employee” who can make important and potentially damaging decisions if they were allowed to hang-out for a few weeks before actually leaving.  Shouldn’t the simple and effective “pack your stuff and leave” axiom apply to some of the most powerful people in the world a/k/a U.S. Congressional Representatives?

Members of Congress are our employees!

I start with the simple definition of lame-duck:  “An ineffective person,  a weakling.”   Relying on reference answers from Answers.com to provide you historical background, the “lame duck session” was created as follows and for the reasons stated.

The 1933 “Norris Lame Duck” Amendment, as it was popularly known at the time of its ratification, eliminates the December to March Congressional “lame duck” short sessions that resulted from constitutionally and legislatively established dates for the beginning (December) and close (March in odd numbered years) of congressional sessions. The March date reflected the time required to journey to Washington before railroads shortened travel time. Sessions beginning in December of the even years lasted only three months. Congressmen elected in those years did not take office for thirteen months, and those whom they had defeated continued service in the short session. The sessions, marked by obstructionist filibusters, were unproductive, and in light of change in travel and communications, became obsolete. Their potential for troublemaking was confirmed during and after “Secession Winter” (1860–1861). Since altering the term commencement from December and March to January shortened the constitutionally mandated terms of those in office, a constitutional amendment rather than legislation was required to effectuate the reform. The amendment’s author, Senator George Norris, concerned with congressional efficiency and accountability, regarded it as one of his greatest achievements. The amendment also moves the inauguration date for president and vice president from March to January, clarifies the status of the vice president–elect should the president‐elect die before taking office (vice president–elect becomes president‐elect), and enables Congress to legislate concerning other stipulated exigencies regarding presidential succession.  (emphasis added)

It is interesting to note that the reasoning for eliminating the short (December to March) sessions in even numbered years was these sessions, which included members defeated in elections, were marked by obstructionist tactics and regarded as unproductive.

Further necessary historical reference is the content of the Twentieth Amendment and 2 U.S.C. § 7:

2 U.S.C. § 7 reads:  Time of Election: The Tuesday next after the 1st Monday in November, in every even numbered year, is established as the day for the election, in each of the States and Territories of the United States, of Representatives and Delegates to the Congress commencing on the 3d day of January next thereafter.

So, in summary of the references provided, the 20th Amendment requires that Congress begin its sessions on January 3rd, unless it decides by law to change to some other day, each year and shall have at least one session per year.  The federal statute requires that the national election of members of Congress take place in early November of every even numbered year.  Thus, the gap of time between the date of the election and the 3rd of January remains a lame duck time frame (if Congress decides to be “in session”).  The very concept that the Noris Lame Duck Amendment (20th Amendment) sought to eliminate is now the basis of which Congress has created a lame duck session by passing the statute setting the date of elections in stone to take place in November.  Why does this kind of stuff seem to happen with our lawmakers and why has it continued without us, the voters demanding change?

Is there a simple solution?

First, let me emphasize here why making a change to this situation is important.  Does it make sense to anyone to have a group of 60 plus Representatives fired from their jobs hanging around for two months before before being required to clear their desks and leave.  During this time, these lame duck fired members of the House can do amazing damage.  They can act as obstructionists to the passage of valid legislation that needs to be attended to e.g., extending the Bush tax-cuts before the end of the calendar year.  Conversely, they can perhaps join with a remaining minority of Congress to attempt to pass unwanted legislation during this two month period.  Lastly, why should we the employer have to pay salaries to lame duck members.  Members of Congress are paid a per annum amount of money.  However, may we not insist that the per annum amount be reduced pro rata by two months for members that were fired each even numbered year?  After all, we are the employer are we not?

There are several options to solve this problem however, there are two that are more simple than others.  One solution is to have the new Congress start its first session a couple of weeks after the election and continue through a future date in the new calendar year.  For example, by law the 112th Congress could be required by law to start is session on November 22, 2010 and last until whenever, May 31, 2011 or whenever.  Wouldn’t that comport with the content of Section 1 of the 20th Amendment?  Arguably it would.  On the other hand, a different solution would be that there be no Congressional session whatsoever between the date of the election and January 3rd of the following year.  Thus, there is no such thing as a lame duck session because none of the fired members of Congress will be “in session.”  Moreover, this would again allow us to save two months of salary for each defeated member of Congress every other year provided we, the voters and taxpayers, demand that Congress pass that necessary legislation!  A third simple solution is that Congress amend the election statute referred to above.  Congress can amend 2 U.S.C. 1 Section 7 to push the date of the election to a day in mid, or even late December of each even numbered year.  That would work, wouldn’t it?  An election can be held in December just as easy as in November.  Again, eliminating the “lame duck” session is what is important here and if it is necessary to move the election to December in order to accomplish the goal, then so be it.  To all those that would attempt to argue that eliminating the lame duck session is not important–I would simply point to the fact that even in 1933, a majority of the representatives throughout the country felt it was important enough to pass a Constitutional Amendment in order to do so.