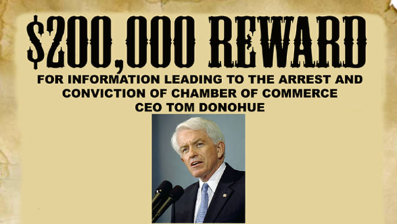 Did you seen this “Wanted Poster” referencing Chamber of Commerce President Tom Donohue?  Outrageous.  A liberal activist group, called Velvet Revolution (cute eh?) has put a de facto bounty of $200,000 on Tom Donohue.  The offer is real and it seeks to flush out any criminal wrong doing in Donohue’s past.  The headline at Fox News is “Liberal Group Puts Bounty on Head of Chamber of Commerce CEO.” The story advises us that the mouth piece for Velvet Revolution is an attorney (surprise!) named Kevin Zeese.  According to Fox News, the group originally offered a mere $100,000 but recently increased the reward to its current amount thanks to a group of large donors.  There are several aspects of this that are disturbing.   This new example of political hardball serves as the impetus for me to start writing posts again after many months vacation.  Thank you for coming by.

Velvet Revolution is the term given to  a non-violent revolution in Czechoslovakia in 1989 when the Communist government was overthrown.  My inference is that this group, Velvet Revolution believes that the U.S. Government is akin to the Communist Party and is looking for a non-violent overthrow of something. . . the Government?  In any event, the idea is, if Velvet Revolution can act as a clearing house for any potential skeleton in Donohue’s closet then the leads will be forward to the Justice Department or the like.  The wording on the wanted poster itself indicates that the skeleton in the closet must be large enough to rise to the level of a criminal conviction in order for a reward to be paid.  Zeese calls the national Chamber of Commerce a right-wing extremist group that is primarily a mouth piece for corporate America.  One might describe Kevin Zeese as a left-wing zealot.  Earlier this year Zeese stated in an article he wrote that he was one of eight people arrested for disrupting Congress.  Of course he has his own agenda thus his involvement, if not outright leadership in Velvet.  However, that is not the point here.

The point is that this represents a new open level of hostility between domestic people and groups with different agendas.  It could very well explode into an atomic bomb of direct financial nastiness while giving fundraising a new 21st century meaning.  If it hasn’t jumped out at you yet, let me explain.  When people or groups look to personally disparage others with viewpoints different than their own, it obviously generates all kinds of heat.  Here we have a group with an agenda that has decided to solicit allegations of criminal wrongdoing from the general public because apparently the group has been unsuccessful in finding any on its own.  Where will this slippery slope bottom out?  I see this opening the door for other groups to counter-attack.  Perhaps Donohue might sit as one of the board of directors of an organization that now wishes to solicit information of criminal wrongdoing on Kevin Reese.  Does the charge of “disrupting Congress” rise to a sufficient level so as to properly disparage Zeese?  You decide.
The organizations themselves do not have to pay the reward money from their own coffers, they just has to do private fundraising from the “public” and there you go, reward money sitting in some attorney’s trust account.  On a positive note this may create a few jobs.   Someone has to sit at the computers receiving emails or answering the hot-line telephones thus fielding the leads.  In response to being asked about leads coming in regarding Donohue, Zeese said, Velvet has received a “handful of leads.”  What else is he going to say?

Political Bounty is out in the open.

Something else that concerns me about the fact that political bounty is now out in the open is that it will encourage more invasion of privacy.  Reporters routinely “vet” political candidates which is a nice way of saying they’re also looking for dirt on the candidates.  I doubt reporters receive rewards from organizations for their successes–at least not above the table.  Political opponents obviously search for dirt on one another for the purpose of disparagement but not likely for financial bounty purposes.  This process of offering money for information of criminal wrongdoing by persons of influence will likely escalate.  If so, then just a bit further down the slope will be the reward for information leading to the conviction of criminal wrongdoing of politicians as I have opined here.  Is that a good or bad thing?  Where will it stop?  No doubt the political process in the United States is already a shameless disgrace however, I say the polarization of political agendas is definitely Going Rouge. Can you imagine the reward amount a liberal organization will try to raise to attempt to obtain information on Sarah Palin?  I predict that if Governor Palin is a presidential nominee in 2012, the reward will be in the millions!  Lots of jobs created though i.e. people will be needed to answer that hot-line.   Once this gets going, it will spread like a pandemic to state and local politics.

My other concern is that the offering a financial reward will expand beyond the concept of information leading to a conviction of a criminal act.  I am unable to think of anything of substance that would stop people or groups from using this same process for information leading to the disparagement of someone, i.e., where’s the dirt?  Talk about going rouge!  I can envision it now–ABC liberal left-wing organization offers $50,000 for any credible dirt on the right-wing conservative candidate in a state representative’s election race.  In today’s economy, there would be many people out there scouring for dirt on the candidate notwithstanding their political views.

I see this reward thing as bad news.  What do you think?  Post a comment or email me.