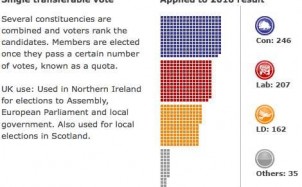 Tasmania, Malta, and Ireland have one thing in common.

These countries use a voting system referred to as STV (Single Transferrable Vote).  For the second time in less than a decade, the proponents of STV here in British Columbia have been successful in getting a Referendum on the ballot.  There are less than 11 days remaining before the polls close on the issue and we find out how STV did the second time around.  By the way, advance voting for the 39th Provincial Election begins on May 6th.  The voters of B.C. will decide again whether to keep the current one vote person per candidate system or change it (I did not say “improve” it) to a system called STV.  I know how impressed all of the readers will be with STV simply by noting the impressive list of locations in which STV is currently used.  I’m just

saying–whatever electoral system Malta is using is reason enough for many people to believe a “reform” is overdue.  What is really interesting here is that the push for STV to become the law of the land in B.C. did not first originate in California!  We have all grown accustomed to the fact that the really great new reform ideas come from California.  I’m thinking that if STV is successful here in B.C.; maybe we can export it to the U.S.!  Might be some tariffs attached though.  Okay, enough with the tongue and cheek stuff, let’s talk about STV and FPTP (First Past The Post).  However, I have to say this.  I’m a little disappointed, if not peaved, about the fact that the Government website, which is supposed to be neutral with respect to the referendum, uses the word “REFORM” at the top of the page designed to inform the B.C. citizens of what is going on.  The simple definition of reform is to “make changes in something in order to improve it.”  Does the Government’s use of the word “reform” in and of itself present a clear case of bias?  Who says that by going to STV, the current system will be improved?  The answer is the proponents of STV say so but our Government should not be validating the referendum by calling it a 2009 Referendum on Electoral Reform. What say you?

It’s sort of simple, but sort of complicated.  The idea is this.  Rather than have a one vote per person going only to one candidate, you could have your vote split up and help elect other candidates whom were not your first choice.  In effect, your one “transferrable” vote could help elect a second, third, fourth, and so on, choice.  The whole concept is designed to minimize, if not eliminate, the principle of “majority rule.”  Proponents of STV would like say, “Why should someone who obtains a majority of the vote in an election district (called “ridings” in B.C.) be the single elected representative for that district?  My only answer to that question is self-evident; “Because he or she received the majority of the votes, duh!”  However, the STV people will counter and say, “Yes, but what about the 49% of the folks that did not vote for the majority candidate?  They receive no representation at all.”  Their solution is this.  Let’s expand the geographical size of the election district and increase the number of people to be elected (to at least a minimum of two) and then we can have two people elected to more proportionately represent the district.  One reply I have to that argument is this.  Why not simply allow the folks in the enlarged geographical area to elect their own candidate by a majority vote in the first place.  In that situation (using the current FPTP voting system), the person elected in that geographical area becomes the representative for the folks that the STV people were trying to merge into the a different district.  See what I mean.  It’s simple but sort of complicated.  Let me confuse you more.  Here’s how the transfer of your vote system works.  Let’s say there are 10,000 “valid votes” cast in a district.  The legal formula promulgates that this number is divided by the number of “positions” to be elected plus one.  Three positions to be filled would require that the 10,000 valid votes be divided by 4.  Add one vote to the result of that division and the sum is the magic number a candidate is striving for.  This first mathematical exercise is necessary to determine the “quota” of votes necessary for a candidate to be elected.  In other words, any candidate that receives 2501 in our example would be elected.  Say one person received at least 2501 “first choice” votes.  All of the votes the winning candidate received above the quota are deemed to be “surplus” votes.  A whole new mathematical formula now kicks in to find out who the second elected candidate is.  After that, we do more math to determine who the third elected candidate is.  Here’s the link to see how this other math is crunched.  Or, alternatively if you would rather just see a simple example in pdf format, click here.

After you study both sides of the issue, you will be confronted with an important question.   If the referendum passes, the number of electoral geographical districts in B.C. will be reduced from 85 ridings to 20. The total number of elected officials will remain the same at 85.    Here’s good example of how that might impact the folks.  Let’s say STV is the system used in the U.S.  The electoral district that now includes New Mexico for Congressional representation is now merged with Texas.  The total number of elected representatives will stay the same but the process to determine who wins the election is STV.  Let’s say there are 32 representatives in the House of Representatives from Texas (which is correct).  Let’s also say New Mexico has 3 representatives in the House of Representatives (which is correct).  Based upon STV, all 35 representatives could come from Dallas, Houston, San Antonio, El Paso, Austin, Fort Worth, Wichita Falls and so on.  The folks in Santa Fe, or Clovis, New Mexico now have no representation.  You think that wouldn’t happen; you’re wrong.  Just because the folks in New Mexico cast their vote in order of choice, i.e., first choice, second choice and so on does not mean that any of the candidates located in the heretofore New Mexico geographical area received enough votes to meet the quota nor does it mean that after all the “transfer math” is done a candidate from that geographical area will be elected.  Study the examples provided by the B.C. Government or go to NOSTV.org to see exactly how this type of elected representation can, and likely will happen in B.C.  If you live in an area outside of Vancouver, you could likely end up with a representative or group of representatives all from within the greater Vancouver area.  How many more MLA’s do you think the Vancouver area needs?  There are now several from Surrey, several from Vancouver, a couple from North Vancouver, seven MLA’s from Langley, three from Richmond, a few from Delta, White Rock and so on.

An STV Prediction — Who has the better marketing plan?

No doubt about it.  The pro-STV people have the better marketing plan this time; hands down.  If you go to both websites you will see what I mean.  Here’s the Pro STV site enlarged. OR Here’s the No to STV site enlarged. Everyone knows that when it gets down to the nitty gritty it’s the marketing of an issue or candidate that makes the difference, not necessarily the facts.  I’m just saying; look at the Senate race in Minnesota for crying out loud!  Marketing, text-messaging and donations is where it’s at.  You can’t expect to just present facts and expect to win.  I’m really disappointed in Norman Grdina, the financial contact with the No BC-STV Campaign Society.  Unfortunately, Mr. Grdina is a forensic accountant—not a marketing expert.  It is kinda cool that he is a Notre Dame alum but he should have studied marketing instead of accounting.  In the event you missed it when you were at the B.C. Elections Government website, the taxpayers contributed $1,000,000 to the funding of the marketing campaigns.  I have no idea why yet, but according to the website, B.C. Elections was required by law to give each organization $500,000 in cool cash to get the word out.  In these tough economic times, doesn’t that piss you off?  Does me.  Heck, if we were going to throw some money away; we could have simply gave it to GM or Chrysler.  In any event, we’ve paid for much of the marketing hype on the Pro STV vs. No STV campaigns.  Unfortunately, I believe the Pro STV got a much bigger bang for their buck and will likely win.  I’m clearly against changing the current FPTP (First Past The Post) system we are using but I do believe Jamie Deith and  STV folks have done a much better job of marketing their “non-message.”  It reminds me a lot of the “Change you can believe in” slogan that was so very successful for obama.

We’ll all decide here in a few days.  I just hope the folks that have a inkling for change will do some research before they cast their vote to STV.  Please vote No on the STV referendum.