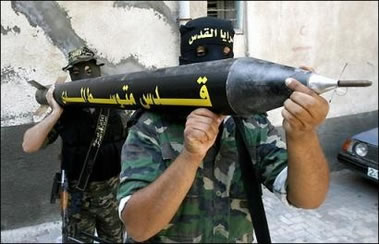 We Already Gave $20.3 Million in February!
Using one of those highly publicized Presidential memorandums–a simple stroke of his pen, Obama sent $20.3 million of your tax dollars to Hamas!  The February memorandum states that the money is for urgent migration need for the people living in Gaza–which is controlled and governed by the terrorist organization called Hamas.  Using a deceptive set of words, Obama has drawn upon the legal authority of a Congressional Act that was passed in 1962 to waste your money during this American economic crisis.  Obama has manipulated a 1962 Congressional Act for his purposes and to arbitrarily decide that we should support the very people who send rockets into Israel on a regular basis.  Now Obama wants to send more.

While the rockets continue to be launched into Israel1, the United States leadership wants to send money to Gaza!  On one side of his mouth Obama markets his insane spending programs by claiming that the American economy faces cataclysmic consequences if we don’t raise taxes and spend spend spend; yet out the other side of his mouth Obama wants to initiate ridiculous spending in the Middle East.  One again, I have to ask like a voice in the dessert; “Do you, the American taxpayers care?”

On March 7, 2009 Fox News released the results of a poll it conducted in which Americans were asked; “Where is the money coming from that the government is planning on spending in the stimulus package and in this year’s budget?”  The result of that poll was that twenty four percent (24%) of the American people in 2009 actually believe that the Government has its own money to spend!  So, we may safely conclude that at least 24% of the American taxpayers do not care what the Government does with its own money.  Unbelievable.  I may safely conclude that twenty-four percent of the American population is ignorant.  The same Fox News poll showed that sixty five percent (65%) of the American people knew that the money the Government was spending was taxpayer’s money.  I guess about eleven percent (11%) do not have a clue.  So, the questions here in this article are addressed to the majority of the taxpayers who know that it is their money or more specifically, their children’s money that is being spent.  Please note, the American folks that do not pay taxes arguably have no credible opinion so the question is not address to them.

Secretary of State Clinton Pledged $900 million in aid to the PLO and Hamas!

But wait! Congress has to approve it.  State Department spokesman Robert A. Wood said all the money is “subject to Congress’ approval.”2  Therefore, it is not too late for you to fill the airways with your comments to your United States Representatives and Senators.  You can call, you can fax, and you can email any member of Congress.  Moreover, a large number of members of Congress are on twitter.  You have no excuse.  You can say, STOP!  Obviously, I join the 14 year old Conservative, Jonathan Krohn who recently spoke at CPAC whom I believe would be against the Government sending money to the Palestinian Authority.  By the way, if you are one of the minority in the U.S. now that approve of Obama’s spendulus package and his record deficit budget for 2009, I just want you to know that the $900,000,000 that you likely will implicitly approve of could have adjusted 45,000 home mortgages downward $20,000.00 each.  Instead, you would rather send the money to the Palestinian Authority to do whatever it wants to with your money.  Can you say; give me an “H”, give me an “A”, give me an “M”, give me an “A,” and give me an “S!” What does that spell: HAMAS!  What is Hamas you ask:

Hamas was created in 1987 by Sheikh Ahmed Yassin, Abdel Aziz al-Rantissi and Mohammad Taha of the Palestinian wing of Egypt’s Muslim Brotherhood at the beginning of the First Intifada, an uprising against Israeli rule in the Palestinian Territories. Hamas launched numerous suicide bombings against Israel, the first of them in April, 1993.  Hamas ceased the attacks in 2005 and renounced them in April, 2006.  Hamas has also been responsible for Israel-targeted rocket attacks, IED attacks, and shootings, but reduced most of those operations in 2005 and 2006.

In January 2006, Hamas was successful in the Palestinian parliamentary elections, taking 76 of the 132 seats in the chamber, while the previous ruling Fatah party took 43.  After Hamas’s election victory, violent and non-violent infighting arose between Hamas and Fatah.  Following the Battle of Gaza in June 2007, elected Hamas officials were ousted from their positions in the Palestinian National Authority government in the West Bank and replaced by rival Fatah members and independents. Hamas retained control of Gaza.  On June 18, 2007, Palestinian President Mahmoud Abbas (Fatah) issued a decree outlawing the Hamas militia.  Israel immediately thereafter imposed an economic blockade on Gaza, and Hamas repeatedly launched rocket attacks upon areas of Israel near its border with Gaza.  After the end of a six-month ceasefire the conflict escalated, and Israel invaded Hamas-ruled Gaza in late December, 2008. The Gaza conflict concluded in mid-January, 2009.3

Hamas is a terrorist organization.  Gaza is controlled by Hamas.  Obama plans on sending 300M dollars of your money to Hamas under the lie of “rebuilding the infrastructure” of Gaza.    My question is this, “Why is the American Government spending any money at all to rebuild the infrastructure of Gaza?”  Does the average American taxpayer (mostly the wealthy Obama!) approve of this expenditure?  Let’s put this in the simplest of terms.  It is conceded that Hamas is funded by Russia, Iran, and other anti-American anti-Israel governments.  Hamas sends its rockets to Israel killing innocent people.  Israel responds and bombs Gaza.  Subsequently, Eygpt and other Arab countries call for a Conference on the Reconstruction of Gaza and Obama sends Secretary of State Clinton to the Conference.  Again, I remind you, American taxpayers, you can make a difference.  Contact the members of Congress and scream: STOP!  Wouldn’t it be great to see the people making a difference.  Wouldn’t it be great if the American taxpayer held members of Congress accountable.  Of course, the problem is that members of Congress are, like the President, elected by a large number of citizens that do not even pay income taxes–and apparently do not care where or how the government spends the money it collects in taxes from others.

The U.S. Government is okay with the Palestinian Authority controlling $600, 000, 000 of your money!

At times I simply want to scream; “Americans you are such idiots!”  Why, are you so apathetic?  Obama has also decided to send $600M dollars to the PLO to assist them in whatever they want to do.  Hard times in America, right?  Robert A. Wood, a spokesman for Clinton said, [the $900 million includes] $600 million in budget and development aid to the Palestinian Authority.”  So, in other words America, you are not only paying for your own government’s outrageous deficit budget, you are going to pay for the PLO’s budget as well unless you take immediate action.  Again, it is not too late.  Even the money the Arab nations pledged to Hamas and the PLO has not yet been sent.  Apparently, the terrorist groups Fatah and Hamas are quarreling about who is going to receive these lottery funds.  According to an article posted at the Democratic Underground website, the Arabs are waiting for the disagreement to be worked out between the Palestinian factions.  You can stop this by taking the simple action of contacting your appropriate members of Congress and demand that they not support such a use of your tax dollars.  Do it! You’ll feel good and be glad you did.

By the way, in the event Congress does approve of the expenditure of $900 million take a moment to meditate and compare the amount to what the several Arab countries in the Middle East are going to spend collectively.  If my simple math is correct, while being broke and not a country situated in the Middle East; we have pledged nine-tenths (90%) of the same amount that a bunch of wealthy Arab countries have decided to give away.  Think about it.  Several of the most wealthy countries in the world (and being situated in the same general geographical area as Gaza) have deemed that $1 billion is an adequate contribution.  Yet, the United States, being broke and close to bankruptcy itself, suffering from an economic crisis and spending record deficit funds ostensibly to take care of the American people, is acting like its rich!

What do you think?  Thank you for your support.  Please leave your comment below whether you disagree or agree.

1. See Transcript of Clinton’s Press Conference of March 2, 2009: “. . .But I have to confess I am troubled by the continuing rocket attacks coming out of Gaza, 15 to 18 rockets in the last several days.”
2. http://news.yahoo.com/s/ap/20090301/ap_on_go_ca_st_pe/ml_clinton_mideast
3. http://en.wikipedia.org/wiki/Palestinian_National_Authority
4. http://en.wikipedia.org/wiki/Hamas