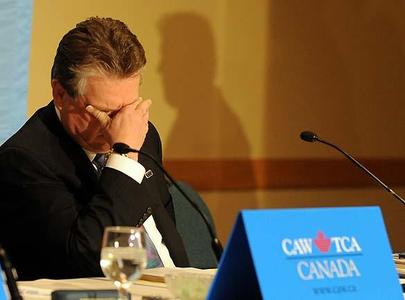 On December 9, 2008, I wrote an article here that quotes the Canadian Auto Workers’ Union President, Ken Lewenza as saying that he was pissed off.  Now, according to an article quoting Lewenza in the Toronto Sun on March 17th, he “. . . went to sleep angry and woke up fuming. . .” In December, Lewenza was mad as hell that Parliament recessed before a “cram down” automotive spendulus stimulus bailout was in place.  In December Lewenza knew if the “urgent” bailout was not in place quickly before the Canadian people had time to think; it would be much harder to obtain it later.  Moreover, and perhaps more importantly to him, Lewenza knew if the government bailout did not come in a hurry in December, the CAW might have to actually grant the Big Three serious labor concessions!  On December 9th, my response to Lewenza being pissed off was simply, “Who cares?”  My response here is; “So, who cares?”   The answer to the question both times is the same.  The only people that might care that Lewenza went to bed angry and woke up “fuming” are the members of the CAW.  Lewenza is mad this time at Chrysler.  In December he was mad at Parliament, the Governor General of Canada, and Harper.  Here’s a guy that is supposed to be a leader of 30,000+ Canadian Auto Workers in negotiation with the auto manufacturing companies, and his strategy is to make headlines by clamoring his alleged anger to the public rather than offer substantive arguments for the CAW’s position.  I’m not impressed.  I say Lewenza is actually hiding a smile in the photo to the left.  What most Canadians do not know is that these alleged painful concessions (wage freeze) granted to GM by the CAW are all subject to GM receiving taxpayer bailout money!  What? In other words, CAW does not agree to cost saving concessions to GM unless the government loans money to GM.  I’m hard pressed to understand that strategy.  You would think that Lewenza would have negotiated a deal with GM regardless of whether GM qualifies for government bailout funds or not.  Maybe I am simply not near as smart as Lewenza but it seems to me that if GM does not get our taxpayer bailout funds, then won’t GM want deeper concessions from the CAW, right?  The wage freeze that Lewenza touts as some big major sacrifice by the CAW members was already in place contractually last year.  The new agreement simply extends the wage freeze an additional year.  We’ve been slimed again by Lewenza.

Chrysler wants to cut labor costs by 25%; are you angry about that?

I am baffled by the thought that Ken Lewenza would believe that the Canadian people would be concerned at all that he is angry at Tom LaSorda, President of Chrysler because LaSorda wants to cut Chrysler’s labor costs.   I’m glad that Chrysler wants to cut labor costs and I believe most Canadians feel the same way.  Here’s the deal.  The CAW negotiated a deal with GM wherein the CAW has agreed to a freeze on wages until 2012; shorter vacations; and more contributions to its members own health benefits.  Lewenza has got to be hiding a smile in the photo (above-left)–these concessions are hardly a major sacrifice by autoworkers.  I am unable to find any report that CAW members agreed to a wage cut–and that is exactly what is needed.  Chrysler has the correct position here.  The CAW must agree to wage cuts–not just a wage freeze–in order for these companies to have a competitive chance of surviving.   Lewenza pretends to be a fair-market capitalist by complaining that Chrysler would have an unfair market advantage over GM if the CAW were to actually cut wages. Give me a break.  Lewenza is a union leader—he hardly cares whether one automaker has an advantage over another.  Besides, the wage cut that Chrysler is demanding might be the only way it can obtain the government’s loan approval.  Lewenza certainly did not offer any hard evidence that Chrysler would have an unfair advantage over GM.  Just saying it does not make it so.  The CAW is only interested in conceding a bare bones minimum (if anything at all) in order for GM and Chrysler to receive taxpayer bailout money!  If the CAW were actually interested in the long-term survival of the Big Three, it would seek solutions that ensure the competitive viability of the companies.  Such solutions undoubtedly call for the CAW members to agree to wage cuts that bring their wages more in line with the rest of the world-wide auto industry.   There is no evidence that the CAW has adopted a different philosophy that in the recent past.   In December, I pointed out the fact that the CAW had adopted a seven point strategy in 2005 for dealing with companies within the auto industry that might seek concessions from the CAW.   Below I have repeated strategy number one because it is far more aprapos today than in 2005.

1. Resist concessions at all costs: We will demonstrate with actions, when words are not enough, that auto parts companies cannot solve their problems on the backs of their workers through concessions in wages, pensions, and benefits. If this requires demonstrations, plant occupations, strikes, or any other non-violent action by CAW members and their community allies, then the CAW will be ready. Parts makers who attempt to solve their problems by forcibly extracting concessions from their workers, will find their ability to effectively do business in Canada severely constrained.

There is no doubt that dialogue between Lewenza and Chrysler will continue to heat up over the next few days.  Chrysler needs to hold firm against the CAW and its hyperbole. According to some internet bloggers, labor unions are less than honest.  See Unions are a cesspool of corruption and crime for a quick swipe at unions.  I’m not quite ready to go as far as other bloggers in my description of labor unions but no doubt the unions continue to leave a trail of slime every where.  I simply hope Chrysler knows this as well.

The Federal Government must hold firm.

Regardless of whether the CAW and the auto companies actually reach agreements, the Federal Government must hold firm as well.  The problem for us, the taxpayers is we do not know what the government’s due diligence is.  Federal Finance Minister Jim Flaherty has said that GM and Chrysler “would have to pass a “survivability test” including negotiating “competitive” compensation packages for workers with counterparts at U.S. unionized and non-union auto plants.” Notice that the survivability test includes a requirement that the compensation packages for autoworkers must be competitive.  How will the government determine the competitiveness of these packages?  Will it compare the compensation packages to the wages paid Korean workers by Hyundai and Kia?  Will the government require that the compensation packages be competitive to what Toyota and Honda pay their workers?  Our federal government should not simply give GM a wink and a nod while pretending that the agreement ratified last week by the CAW meets the survivability test as articulated by Flaherty.  Industry Minister, Tony Clement recently said, “We will ensure that there is a viable long-term sustainability plan involving all stakeholders in place before we commit any taxpayer dollars.” The problem I have with both the statements made by Flaherty and Clement is that we are not provided any specifics as to how the government will decide that GM and Chrysler are worthy of your tax dollars.  What is the test?  How will the government decide that there is a plan that ensures long-term sustainability or that the companies have reached or exceeded some nebulous “survivability” test?  No one seems to be sharing any of the specifics.  Is it because the government does not want us to know exactly how it will decide.  I’m concerned that the government might be leaving room to talk out of both sides of its mouth.  What say you?  I strongly encourage you all to contact Jim Flaherty, the Federal Finance Minister and the Industry Minister, Tony Clement to voice your opinions and concerns.  You may email Flaherty at flaherty.j@parl.gc.ca however, it is not as easy to reach Tony Clement.  The Industry Minister’s website provides you an address, phone numbers, and general inquiry email.