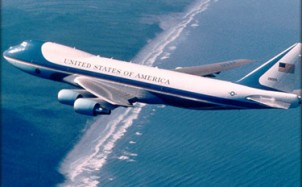 According to Geobytes.com, it is 110 miles from Washington D.C. to Williamsburg, Va.  Thursday, February 5th, Obama traveled to the Democratic House of Representatives weekend spa retreat being enjoyed at Williamsburg, Virginia.  By the way, taxpayers are footing at least part of the cost of this “working get-a-way.”  Tough times, eh?  Obama decided to go there to make a politicial campaign hooray over the spendulus package that he is trying to coerce the American people to accept.  I was watching Fox News channel at the very moment the program was interrupted for Obama’s unannounced speech at Williamsburg.  Here comes Obama on stage as if he’s out on the stump.  I have to admit, I am not really impressed with the President of the United States trying to act “cool” on television.  There’s just something not quite right with the President regularly using slang.  “What’s going on democrats?”   In any event, not long after Obama was on the stage, he said to the audience, “Thank you for giving me an excuse to use Air Force One.”  His words, not mine!  I was immediately stunned.  I didn’t know how far Williamsburg, VA was from Washington DC but I knew it wasn’t far and was most likely a fairly short drive.  After the speech, I immediately hit Google to obtain the distance.  I thought to myself, ‘why would he use Air Force One to travel such a short distance?’  Moreover, why would he say he did so on national television?  Not smart in either instance.  I would guess that most Americans have no idea what it cost per hour to fly a jet aircraft, much less know the cost of operating Air Force One with all of its attendant costs other than just fuel.  We all know how most politicians think with respect to the intelligence quotient of the American people, or lack thereof.  Obama was quite proud that he had the “excuse” to use the aircraft and was puffed up about it.  Hey, Obama!  What’s wrong with Marine One (the helicopter) that other President’s use to travel between the White House and Camp David, Maryland?

According to reliable research in 2006 by the House of Representatives, it cost more than $56,000 per hour to operate Air Force One.  Probably costs a little more today than in 2006 but who’s counting penny’s right?   Now, we don’t actually know what it costs to operate Air Force One per air mile, but we can do some basic math.   So, I’m thinking that a round trip of approximately 220 miles probably cost U.S. taxpayers at least $25,000 t0 $30,000 for Obama to make that trip.  Do you care?

How Much College Tuition Could Be Paid For?

Obama’s campaign speeches included much about helping every young American that wanted to attend college to be able to go to college.  Of course, what that meant was that Obama was promising to spend taxpayer money to pay for college educations in part, if not entirely.  Now in these troubling times, times in which Obama refers to as the worst financial crisis in American history, don’t we have a right to expect Obama, the alleged proponent for “change”, to act responsibly and not waste taxpayer’s dollars?  Do you remember Obama promising that he was going to pay for his programs by going through the U.S. Government Budget “line by line” to cut wasteful spending?  Do you remember that?  I do.  I am shocked that Obama spent a wasteful amount of money going to Williamsburg in the first place, much less by using the most expensive form and manner of travel that is available to him.  For every single hour that Air Force One operates, your government could have paid for the annual tuition in 2004 for an in-state resident of Wyoming for 24 years!  Okay, how about this; 24 students in Wyoming for one year!  Okay, I understand that Obama is not from Wyoming.  Let’s look at the average annual tuition cost for an in-state student in Illinois.  An hour of flight time on Air Force One would pay for the annual tuition for more than eight Illinois students in 2004.  So, if you’re Mr. Obama faced with the opportunity to take your first flight on

Air Force One or send several kids in Illinois to college for a year, which do you choose.  If you following Obama on Twitter, you probably would have received advance notice of his decision.  Obviously, Obama felt that the need to do a hooray to the American people on television under the guise of speaking to the House democrats was far more important than sending kids to college.  So much for change you can believe in.  I say, it’s business as usual with the same old Chicago style politics.  Obama could have really impressed me and a bunch of other people if he had simply ridden in his limo.  I’m sure he could have accomplished just as much work from the back seat of his limo as he accomplished while sitting in Air Force One.

Don’t get the wrong message here.  I do think the President should go ahead and use Air Force One; I just don’t think Obama should have used Air Force One to travel to the House Democrats weekend spa retreat much less use so much badly need tax payer dollars to fly 110 miles.  The most disturbing thing to me was that while appearing on national television he touts the fact as if it was being cool.  Not cool Mr. Obama.  What do you think?  Am I way off base here?