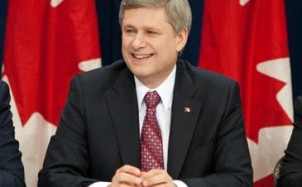 The Conservative Budget is released.

Today Prime Minister Harper’s budget has been released.  If this budget does not satisfy the Liberal opposition, they will move to form a coalition and demand a new election to defeat the Conservative government.  What the Liberals want is no surprise–more spending, big deficit.  Often I wonder if the U.S. Democrats take their cue from the Canadian Liberals of visa versa.  I want to be one of the first that predict that the Liberals and the NDP will do everything they can to cause the budget vote to fail.

A Liberal-NDP coalition, backed by the Bloc Quebecois, was prepared to defeat the Harper government before Christmas after Flaherty (Minister of Finance) delivered an economic update that proposed slashing government spending, selling off assets – and no economic stimulus.1

Despite the fact there were many conservatives that did not want Harper to succumb to the pressure, he did anyway.  Harper persuaded the Governor General to suspend Parliament to buy some time to formulate a “new budget.”  Now that the new budget is being released today, it will be voted on immediately.  The obvious question is this: Will there be enough spending in the budget to convince the opposition that they can not defeat the budget?  I believe that the opposition will oppose the budget regardless of its content.  After all, aren’t all proposed budgets in Canada but a political document–more or less an op-ed in this case.  Harper already knows that regardless of the content of the budget, it will always face opposition.  For example, David MacDonald, analyst at the Canadian Centre for Policy Alternatives opines that:

If the federal government is serious about buffering Canadians against the worst of this recession, it shouldn’t be looking toward tax cuts. It should abandon those ideological precepts.2

I can hardly believe what I just quoted.  Here is analyst working for a institution seeking policy alternatives advocating that the Conservative Party should abandon its ideology of tax cuts!  Need I say more.  Prime Minister Harper, you definitely will not please everyone.  There are those in opposition who believe that only through massive government spending will the country survive an economic recession.

It is reported that the budget will contain $2 billion per year “across the board” in income tax cuts–Obama, pay attention!  Canadian government does not normally operate in a deficit unlike it neighbors to the south.  Its been 11 years since the federal budget included deficient spending.3

The surprise move of the day was the roughly $2 billion per year in income tax cuts. Those cuts will extend to $20 billion over the next six years.
The tax changes will include a slight increase in the basic personal exemption and raising the upper limit on the two lowest personal income-tax brackets.
Business tax cuts were also included in the budget, $2 billion over six years.
Government spending will jump dramatically in the budget — up 11 per cent in the 2009-2010 and three per cent in the year following.
EI benefits will also be extended five weeks for the next two years.
Other measures in the budget include:
* $12 billion for infrastructure spending towards roads, sewers and universities, $1 billion for “green” infrastructure, and $1 billion for clean-energy research.
* $1.5 billion for job training
* $7.8 billion for social housing and home renovation, including a one-year only Home Renovation Tax Credit of up to $1,350 per household.
* $2.7 billion in short-term loans to the auto industry.
* More than $1.4 billion for aboriginal schools, health, water, housing, community services and training.

As far as stimulus packages go, Harper’s budget is as good as one should expect.  I look at it and see some good stuff.  There will likely be lots of shovels going into the ground for building projects and that translates directly into jobs or less unemployment.  I also am pleased to see that the federal government is not going to purchase banks, investment firms, insurance companies, or otherwise get into the private business sector.

I am disappointed to see the $2.7 million in loans being given to the auto industry but everyone knows why that provision was included.  The Ontario economy relies heavily on the auto industry and there is plenty of opposition to Harper in Ontario.4

The real story to write about will be developing over the next few days as we wait and see what the NDP, Liberals, and Bloc Quebecois do to either support the budget or again succumb to their instincts and wage war against Harper just because that’s what they do.