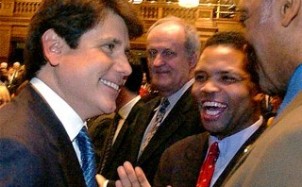 “My lawyer won’t let me tell you about it.”
Getting right to the point.   When the Democratic Governor Blagojevich story hit the news, one of my initial reactions to Jessie Jackson Jr.’s potential involvement was this.  Why has Mr. Jackson lawyered up so quickly?  My next thought was; U.S. Attorneys’ are not stupid nor are they often wrong.  This particular U.S. Attorney, Patrick Fitzgerald is successful, well-known for sure, and famous for his work ethic.  He’s the attorney who prosecuted the CIA leak case which almost got Karl Rove in trouble.  Fitzgerald is also the prosecutor who put Scooter Libby away for a short while.

Yes, we all know the presumption of innocence applies to Jackson–and to Democrat Blagojevich as well.  However, most of us have a tendency to believe that when you have nothing [“absolutely no involvement in any wrongdoing”] to hide, you seldom need a mouth-piece.  Let’s review some of the facts as we know them, and maybe a reason or two will surface as to why both Jackson’s have run to their lawyers.

However, before reviewing facts, let me have a bit of fun and point out to you that in my November 7, 2008 blog post “Gold Flush”, I said (because Obama won the election):

People that read the article probably know I was being a bit factious.  But, I do admit, there is a smile is on my face.  So, one of the latest Jackson statements is that “he openly sought appointment to Barack Obama’s Senate seat but denied offering favors in return. . .” but, just two days ago, J J said, “I never sent a message or an emissary to the governor to make an offer, to plead my case or to propose a deal for the U.S. Senate seat, period.”   How does Jackson openly seek the appointment to Obama’s Senate seat and yet at the same time claim that he never sent a message, or emissary to the Democratic Governor Blagojevich to plead his case?  Come on, J J do you think we are all stupid.  Just two months ago, Jackson was on stage with the Democratic Governor.  Regardless of whether Jackson did anything wrong or not, I can hardly believe he is really telling the American people that he never indicated to Blagojevich what his DREAM was?  The Governor, Jackson, and President elect Obama, are Democrats, all in politics, all from or in Illinois, and all worked hard to defeat Bush in the election.  Hhmm, the thought that Blagojevich would be appointing a replacement to the U.S. Senate never crossed Jackson’s mind while he was “openly seeking the appointment.”  The rampant deceit is insulting.  Let me give you another example.

Jackson has been reported as saying this:

Jackson Jr. added that his meeting on Monday with the governor about the Senate seat was the first time he had a meeting with Blagojevich in four years. Jackson Jr. said he presented his qualifications during the 90-minute meeting, and did not discuss any kind of pay-to-play deal.1

This 90 minute meeting with Blago would have been Monday, December 8, 2008.  It is also reported that Jackson received a call on Monday evening, the night before the Blago was arrested from the U.S. Attorney’s office advising him that Blago’s arrest was happening!  Imagine you’re Jackson.  You’re getting a call (at home?) on Monday night (the same day you met with Blago for 90 minutes) from the U.S. Attorney.  You’re being advised that Blago is going to be arrested.  Most likely, if you’re Jackson you would ask the caller, “what is he [Blago] going to be arrested for?  You suppose?  Apparently the answer would have been, “for attempting to sell the appointment to the Senate to replace Obama.”  Oh, by the way the U.S. Attorney surely said; “Blago tells us that you [Jackson] are the one willing to buck-up serious dough for the appointment.”   Don’t you realize the only purpose for the U.S. Attorney’s office to call Jackson was to take a measure of his response to Blago’s statement?  Trust me, the U.S. Attorney’s office did not owe Jackson a “heads-up” call prior to arresting Blago.  The next day, the arrest takes place and Jackson and his father have lawyered up.  I’m just saying, doesn’t this smell just a little.  Isn’t this all just a bit coincidental?  By the way, apparently the federal agents showed up at Blago’s house to arrest him at 6 a.m. for trying to sell Barack Obama’s senate seat to the highest bidder.  Ouch, hope he had at least his first cup of joe.  Most likely Governor Blagojevich doesn’t own a Clover but he probably can afford one.

This is one I really laugh at.  On Wednesday, Jackson is:

Despite knowing all about it since Monday evening, Jackson is of course still in a state of shock on Wednesday as if to infer that he’s like us and just found out about it.  Jackson may indeed be saddened because most likely Blago will not appoint him to fill the Senate seat while the alleged “corruption” lingers.

America, here’s another insult to your intelligence.  Do you truly believe that Obama himself had no conversations with Blago as to whom should be appointed to fill the Senate seat?  I can smell the Illinois political stench way up here in British Columbia.  I agree with what the Voices of Kansas City said:

Still, the charges against Blagojevich have raised the ugly stench of Illinois-style corruption around Obama at the most inopportune time — as he’s preparing to become president.

If you were to ask Obama about it directly, I’m confident that his reply would be something like this.  “Don’t you realize that the origin of the land called Illinois is: Algonquin for “tribe of superior men.” I’m  just saying.

America, here’s more insult to your intelligence [of course, you should be used to it by now].  Obama said, the one thing he was certain of was that he did not have any discussions with Blago concerning the appointment of his replacement to the Senate.  If you believe that, I feel sorry for you.  If you do believe that, you’re telling yourself that Obama never considered who would replace him in the U.S. Senate if indeed he were to win the Presidential Election.  Are you kidding me?  But here is the real a great example of the stereotypical spin.  Obama said that he would find out for us if any of his staff had any contact with Blago bla bla bla, and after he {Obama} has had a chance to “gather the facts,” he’ll get back to us on that.  Are you holding your breath for the detailed factual disclosure coming your way.  It is always amazing to me how the most important people in the world never seem to know what “their staff” is up to when questioned about shady conduct.  Surely the American people can accept the fact that Obama is far to busy to concern himself with what his staff is doing or whom they’re talking to.  I mean, come on, for God’s sake He is the President elect.  Just want to remind everyone that “change in Washington has arrived.”

It is difficult to believe that no one else will be charged.

It would be refreshing, if indeed Jackson committed no wrongdoing.  But just because he jumps out there talking about his good name and character does not convince me of anything.  I know, few people would admit that they feel the same way but I am confident that I am not in some small minority.  In any event, it is difficult to believe that if Blago is guilty of trying to “sell” the Senate seat, then my question is this; Was there no one out there that actually offered quid pro quo?  In other words, do we believe that if Fitzgerald has Blago dead to rights there is no one single person (candidate) on the other side of the potential transaction that is culpable?  If Blago has been caught red-handed, my money bet is that there will be an additional criminal complaint filed against someone Blago was potentially going to do business with.  If you think I might be far off on this point, then take at look at what the Chicago Tribune generally had to say about this:  The Chicago Tribune:

reported today that businessmen with ties to Blagojevich and Jackson Jr. discussed raising at least $1 million for Blagojevich’s campaign as a way to encourage him to pick Jackson for the Senate seat.2

Keep in mind that the prosecutors allege that Blagojevich was considering awarding the seat to a politician identified as “Senate Candidate 5” because emissaries for that candidate were promising to raise as much as $1.5 million for Blagojevich’s campaign fund.  Jackson is the Senate Candidate 5 that is identified in the criminal complaint.  Man, there is serious smoke here.  Just like the wood stove in my home, when there’s a billow of smoke in the stove, there’s usually some fire coming shortly.

Jackson may not be the one to get burned but someone will other than Blago.  He’s probably going to want to make a deal with Fitzgerald and the quid pro quo for Blago, if he’s guilty, will be to testify against someone else i.e., “fully cooperate” with the U.S. Attorney.  “The next step is anybody who thinks they may have some culpability is going to be running with their lawyers to Fitzgerald’s office to broker some sort of a deal,” said James Cohen, a professor at Fordham Law School. “This is really just the beginning.” Professor Cohen believes that anyone that thinks they have any culpability will lawyer up. Hhmmm.

Thank you in advance for reading and feel free to comment.