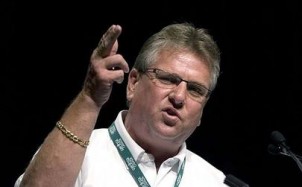 Ken Lewenza says he’s pissed off! First question, “Who cares?” The second question I have is, “why should we care?” Mr. Lewenza is quoted as being fighting mad. He’s mad because Parliament was suspended before a “stimulus package” was in place for the Canadian automobile companies. Lewenza says, “there’s a battle to wage.”1

I happen to believe its a good thing that Lewenza is mad; I will explain below.

An aside, Lewenza apparently loves the use of hyperbole, and he likes to point with two fingers, sort of revolver style. Lewenza became the Canadian Auto Worker’s union boss just this past September. He was the only candidate in a special election held when the previous CAW president, Buzz Hargrove, was retiring. What’s interesting here is that one of the first things Lewenza is quoted as saying just this past September is:

. . . many [auto industry] jobs have been lost as buyers moved to more fuel-efficient cars made by foreign companies — even though the cars are often assembled in Canada or the U.S.

Lewenza is peeved because we, the buyers, have been purchasing fuel efficient cars and therefore, the government should do something about it. Does that seem logical to you?

A little more background is necessary.

In 2005 then CAW president Buzz Hargrove threatened to make sagging auto sales an election issue. What? Three plus years ago, Hargrove and other union leaders were suffering acute anxiety that the auto companies would soon be demanding labor concessions as a solution to the admitted fact that the “auto industry” was in trouble.2 In 2005, Hargrove offered his solution to the problem of sagging domestic car sales. The CAW’s definition of the “auto industry” appears to only include domestic car manufacturers–not those evil import companies.

The way to solve the problems of the auto industry today is to stop the imports from killing us or get the opportunity to export to those nations that won’t let us sell our products today. 3

Hargrove made the above statement at a CAW leadership meeting in November 2005, which was convened to discuss ways to “fight” the expected demand for labor concessions from auto parts manufacturers. Hargrove failed to offer any explanation as to why concessions should not be on the table; of course the answer to that question is quite obvious. If labor concessions were on the table how would that be in his best proprietary interest or that of the workers. At the 2005 meeting, the CAW formulated its “7 point action plan” which by the way reads like a strategic battle plan in anticipation of a war being declared; and even before any diplomatic efforts have been made. The first of the seven strategies stated below, tells us what we need to know.

1. Resist concessions at all costs: We will demonstrate with actions, when words are not enough, that auto parts companies cannot solve their problems on the backs of their workers through concessions in wages, pensions, and benefits. If this requires demonstrations, plant occupations, strikes, or any other non-violent action by CAW members and their community allies, then the CAW will be ready. Parts makers who attempt to solve their problems by forcibly extracting concessions from their workers, will find their ability to effectively do business in Canada severely constrained.4

Okay, stop right there; a little review is necessary. We know that in 2005 the CAW leadership was acutely aware the “auto industry” was in serious trouble. I am quite confident that Hargrove and the 200 other CAW leaders were acutely aware of the situation long before the 2005 meeting. In any event, the CAW president clearly presented his solution i.e., that someone [government?] needed to stop the import companies from killing us [domestic companies] or “get the opportunity to export more cars to those nations that won’t let us sell our products to them.” [sic] Please note that Hargrove did not offer any facts to support his assertions nor did he identify the countries that he was claiming were not allowing our cars [domestic products?] to be imported. Hargrove also failed to offer any details on who was supposed to stop the imports [companies?] or how to stop the imports, or why Canadian citizens should want to for that matter. It is no surprise that Hargrove failed to take any responsibility for the market conditions, nor did he assume any accountability on behalf of the domestic auto industry for the state of affairs. It’s always someone else’s fault–not ours! It’s not the CAW or manufacturers’ fault that Canadian citizens are buying import products, it’s the government’s fault. It is also worth noting; there never seems to be an explanation from any labor representative why concessions are not a possible partial solution to high labor costs!

Despite the fact that auto industry analysts cite labor and product as the two primary reasons for the sales woes of the domestic auto companies, Lewenza comes out of his corner swinging. He immediately draws a line in the sand vowing to fight the Harper government and demands a stimulus package for the car manufacturers! He says, “ . . . that victory means the union will keep pushing for a stimulus package that suits the needs of Canadians and the auto industry.” What does a stimulus package that suits the needs of Canadians look like? The CAW boss is fighting the minority government on behalf of the auto companies. How oxymoronic is that?

Shouldn’t the CAW Targets Be The Banks?

By the way, why is the CAW not fighting the banks? Should we assume the auto companies that are begging for a taxpayer bailout have already been turned down by the banks? If so, why? If not, why don’t the not-so Big Three car companies go to the banks for additional funding? If the banks have turned them down, maybe it’s because the business plan stinks. Please don’t tell me that the credit market is frozen and there is no money available except from the government.

So What Did Happen To The CAW 7 Point Plan?

What happened to the call for someone to stop those evil import companies from killing us? What happened to the urgent desperate need to get those closed markets open? We can easily see that the 7 point plan has become a one or two point plan. The plan has been reduced to a couple of simple strategies. One, the chosen method of resisting concessions at all costs is preeminent. It obviously includes supporting a government bailout for the same companies that the CAW would never give concessions to. The CAW battle cry is: “Give’em tax dollars not concessions!” The plan to resist concessions at all costs is an easier path to follow than one which would actually solve the “auto industry” long term problems. The question no one seems to be asking is this. How will a government stimulus package solve the manufacturers’ problem of having labor costs too high to compete in a global competitive market? With automobiles being manufactured here and in Japan, Korea, China, and India for less while offering more value, please someone explain how a government handout of tax dollars will solve the “auto industry” problem.

Below are provisions of the 7 point plan developed by CAW leadership in 2005 that have disappeared:

If a CAW-represented plant or employer faces big financial challenges, CAW local and national representatives will meet quickly with company officials to examine the financial and operational facts of the situation and develop an action plan. (emphasis added)5

Draw government into the solution: . . . The CAW will work closely with
government officials where appropriate to stabilize and revitalize troubled facilities. (emphasis added)6

Do you see the smoke and mirrors. The CAW offers solutions to a recognized auto industry problem, but then says “IF” there is a problem such that their members’ employers face BIG financial challenges, the CAW will “examine” operational facts to develop a solution. Would outrageously high labor costs be an “operational fact” to examine? I am just wondering: When do you suppose the meetings were held? You know, the meetings between CAW leaders and the not-so Big Three company officials to examine operational facts and to develop an action plan? Perhaps, there were meetings in 2005 and the action plan that resulted is the one being executed right now i.e., blame it all on the government, and demand that the government use tax dollars to bail them all out. This does not comport with the 7 point plan that included a strategy to work closely with government officials when appropriate, but whatever, it simply must not have been “appropriate.”

Recently, Lewenza has spun some different rhetoric. While insisting that the government increase EI benefit amounts for the “auto industry” (not for all unemployed workers) because its not the workers’ fault sales are suffering, he laments:

The union has shown time and time again that it’s flexible and willing to take creative approaches when finding solutions. We welcome the opportunity to join with other industry players in rebuilding the auto industry.7

Would anyone care to offer some evidence of that assertion? Lewenza stayed with strategy number one by going on to say: “. . .slashing workers’ wages and benefits will do nothing to solve the industry’s problems.”

If Lewenza wins his war, the result is likely that in the short term, the companies win, the union wins, and the auto workers win. How do Canadians win, given the fact that we are consistently purchasing cars now with better gas mileage and more value for the price?

The key survivor of the now demised 7 point plan is the win at all cost strategy to save union benefits:

Plant closures or bankruptcies may jeopardize the future pension or post- retirement health benefits of CAW members. The CAW will enlist its Union in Politics Committees and other allies to campaign forcefully to protect the pensions and retirement benefits of CAW members affected by the fight against concessions, and to step up the fight for stronger policies to protect pensions.8

Do not misunderstand me, I’m not against worker benefits. What I have trouble with is the hyperbole that the CAW leaders will use to attempt to bolster public opinion toward their plan to save their salaries, positions, and existence. The CAW will do what is in their best proprietary interest and will resist all concessions at any cost regardless of the conditions on the ground. I have a problem with the fact that the CAW is in denial–its failure to admit that it and the members’ employers are in the position they are in because of their own doing–it is NOT someone else’s fault!

One fact that is not being discussed is this. The Canadian “auto-industry” is not just Ford, Chrysler, and GM. The other automobile companies, some with manufacturing plants in Canada, are not asking for taxpayers to bail them out. Honda doesn’t claim that Toyota is “killing” it with unfair trade and/or labor practices.

Lewenza is fighting mad, well I hope all citizens are as well. The reason it is most likely a good thing for taxpayers that the CAW president is fighting mad is simply this. He wants taxpayer dollars to support companies that have made strategic mistakes. Lewenza wants our dollars to continue to prop up the high labor costs that the CAW has obviously helped bring about. Despite the fact that consumers are buying other products, Lewenza is mad that the government is not using our dollars to subsidize the failed managerial policies of the not so Big Three. So, here’s the way I see it. I’m better off each and every day that goes by that Lewenza is fighting mad. I sure hope he remains mad for a long time.