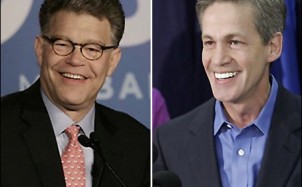 The real question is, did you know it was happening and simply not care?

When I say you been pwned, I mean that non-Minnesotans own you. To say it differently, you’ve been bought with the eliest money from Hollywood and from attorneys from basically every state in the union. Ouch!

As this article is being written, Minnesota is about to start a recount of election returns for the U.S. Senate seat currently held by Republican Norm Coleman. The well publicized challenge is from the famous (in his own mind) Democrat Al Franken. It is currently reported that Coleman leads Franken by 206 votes which, includes the counting of thirty plus absentee ballots for Franken found in an election official’s car two days after the election.  Now, that’s real election integrity at work.  I realize that you did not have to come here to get this news, but there is much more to the story than is being reported by prime news organizations.  The slice of the story not being reported or discussed is: Where did the Franken money come from?

Elections are often won by the one with the most money.

Although I believe most Americans have always known it to be a fact that whichever candidate has the most money is the one that wins.  However, Fox News just reported the 2008 election facts with respect to money spent by the candidates.  In the 2008 Unites States Senate election, ninty-four percent (94%) all the Seante election races were won by the candidate that spent the most money!  Most political pundit’s would agree that but for a major influx of money to the Al Franken campaign, the Minnesota Senate race would not have been close at all.  So, that being a given, the question is, how did Al Franken get enough money to mount this serious, if not winning, challenge against Coleman.  For sure, the lion share of money did not come from Minnesotans but came from all over the United States and abroad.

The total amount of money received for Franken is startling given the fact that prior to entering this Senate race, he was virtually an unknown.  More than 17 million dollars were contributed to Mr. Franken to help him defeat the Republican incumbent.  The disproportionate amount of this 17 million came from out-of-state contributors. Hey Minnesotans, do you think these out-of-state people really give a damm about your best interest? This issue of who actually won this election will be in the news forefront for many months to come.

Not everyone that contributed to the Franken campaign is a famous Hollywood liberal or an attorney; there are many out-of-state contributors that are teachers, physicians, and big dogs from investment management companies from around the country.  However, out of the ten thousand plus contributors, more than ten percent of the contributors were attorneys from the four corners of the union.  How interesting is that?  Why would an attorney or law firm from New York, California, Florida or Washington care who was elected as the Senator of Minnesota?  Here’s even more of an interesting question: Why would famous Hollywood types give a damm?  Is it because those actors and actresses are more politically savvy; that they care about the citizens of Minnesoata; and they know best what Minnesotans need.  I don’t think so.  Well, no matter what the reason Minnesotans: You’ve been pwned by Hollywood and other non-Minnesota residents!

Here’s just a partial list of those “caring” contributors that want to see Franken elected.

Most of the contributors gave the maximum of $2,300.00 for the general election and many gave an additional $2,300 for the primary election.

What all people should know–not just Minnesotans, is this; if Franken wins the election, the vast majority of the big money he used was not from Minnesotans.  My friends, that fact is disconcerting and sad.  It’s sad because it’s probable that the candidate that spent the most money will be elected.  It’s disconcerting because the result could easily be that the best candidate to represent Minnesotans is not elected.  Moreover, it is sad and disconcerting to face the reality that representation in the Senate can be purchased, and by anyone.  Fox News just recently reported that the average amount on money spent by the winning candidates running for Senate was $6.5 million.  Shown above, the Federal Election Commission records reveal that Franken spent $15.5 million to “market himself” to the Minnesota voters.  Franken’s FEC reported balance sheet reveals that he still has $1.5 million in cash.  Maybe Minnesota will get some of that cash!  In any event just imagine the good things that Minnesotans could have done with $15.5 million other than elect a third rate comedian to the Senate.

Let me know what you think.  Thank you in advance for your comments.