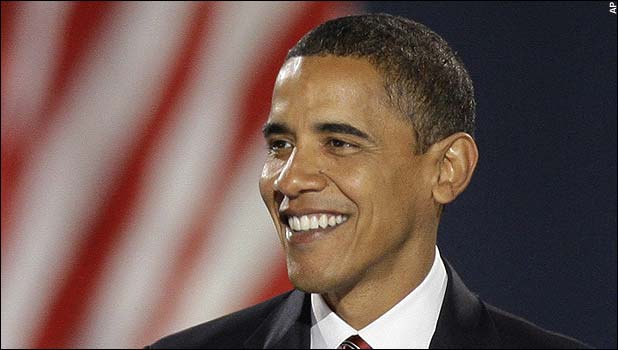 It was here in this sleepy little hollow of South Chicago that the American dream was redeﬁned and shared with all of us.  In this place, this Illinois community, a Great Organizer would rise up to eventually create a new kind of lifestyle: Change, a new dream, non-entrepreneurial, and protected.  In 2004, it was a discovery of human brilliance by the Democratic Party, almost by accident.   In Boston, at the 2004 Democratic Convention, The Great Democratic One, Edward “Ted” Kennedy openly shared the stage with Him.  After He spoke, everyone seemed to know that lifeʼs complex struggles were soon to be no more.  The One1, has arrived.   Barack (blessed) Obama is his name.

Yes, the long arduous search for a transcendent level of wisdom, charm, and rhetoric is over, He was elected as President less than a fortnight ago.  From Kenya to Venezuela, from Berlin to Johannesburg, there were people dancing in the streets, the ﬁelds, the deserts and the jungles.  “Yes, we can!” they paradoxically chanted.  “Bail us out!” they all screamed.  There were women crying in the streets with huge tears of sweetness–many lost their eyelashes.  Whoopi Goldberg ﬁnally unpacked her bag and no longer fears becoming a slave.  Kenya has ordained a national holiday in His Name.  All across America, word processing spell checker dictionaries have learned the two new words–Barack Obama.

One could say that the old American Dream began in 1849, the year “. . . thousands of young people streamed west in unison . . . with a collective . . . dream for a lifetime of riches.”3 These thousands of Americans feverishly going west to stake their claim in the California Gold Rush were dubbed “forty-niners.” Gold became the dreamweaver for a new kind of life where one would work hard for a short while and become rich. Today we contrast the Gold Rush of 1849 to a gold flush of the Treasury and our economy.

The new American Dream: to not have to solve your own problems, to not concern yourself with quickly becoming rich, nor to make a fast fortune.  Instead, instant affordable, if not free, education for all young people 18 to 29 years old will be the new law.  On-the-spot welfare is upon us and available for the taking.  Folks will soon be screaming, “No more taxes!”  In Red States and Blue, men, women and “young voters” will soon text and Twitter the Organizer for a handout.  Young folks will soon ask for and receive that free education.  Poor people throughout this country will now expect and receive free gas and have their mortgage payments made by the government.  The Organizer will quickly command that the price of gas be lowered.  The commuters will cheer because they no longer have to worry about the amount of air in the tires on their cars.

Within His ﬁrst hundred days, The Organizer will:

The Organizer will stop the Iraq war immediately (depending on the conditions on the ground). Osama bin Laden has a renewed fear for his life. The Organizer has vowed to hunt him down and kill him! Pakistan will no longer be concerned about our planes and troops violating its sovereignty.

Stimulus packages will be available and ﬂushed out regularly from the Treasury. With the support and assistance of other Great Democrats, Pelosi, and Reid; The Organizer will tax the evil rich, take their gold, spread it around and give it to the poor. “Long live Barack Obama” they will shout! The rich people, those that make more than $___________ ? a year will despair, many will turn to poker, gambling and other sinful behavior. Exasperation and vexation will run rampant in the empires of the wealthy.  They will hide their gold, but The Organizer will ﬁnd it and extract it from their greedy hands. Wall Street will no longer rule. Ultimately, there will no longer be rich, only middle-class. Everyone will be the “average Joe.”

Peace will come throughout the world. Chevaz, Castro, and Ahmadinejad will be making travel plans soon for a trip to the Great White House. Construction on a new Cuban Embassy will begin shortly. Iran will drop all nuclear research and production without delay.

Jessie Jackson, Jr. will soon replace The Organizer in the U.S. Senate and their will be brotherly love again between Jessie Jackson and The Organizer. Change has arrived and all the people will come together as one. Thousands of young people will volunteer to serve their country and begin forming the New Civilian Security Force to help protect us all.

Also, within the ﬁrst hundred days, the Great Liberal Justice from Chicago, Illinois, Justice John Paul Stevens will retire so The Organizer can appoint a fair-minded Justice; a Justice that will look out for the poor and under privileged. Senator Clinton will replace Biden as a member of the Judicial Committee. The ten current nominees for appointments to the Federal Courts of Appeal will be cast aside and The Organizer will ﬁll the twelve vacancies with folks that suffered injustice; or with people raised in single parent homes, and the like. Senator Clinton and Senator Leahy will help get it done. Yes, the same will happen with the twenty-eight vacancies at the District Court level and the current sixteen nominees.

All across America, even in the Red States, folks know in their hearts that their troubles will soon depart. Every victim of any kind, size, age and gender lacking a cell phone or computer will make their way to The Great Organizerʼs new home in Washington D.C. seeking the new American Dream. Some will walk, some will travel by train, others by plane–“no matter how you get here, just get here if you can,” He will say. Someone asked; “but, wait, what shall we call them?” The two Davids replied, “08ʼers.”

The Organizer will say, “yes, out of this long political darkness a brighter day has arrived. I am that brighter day.” It will be one of the greatest misadventures that the World will see.