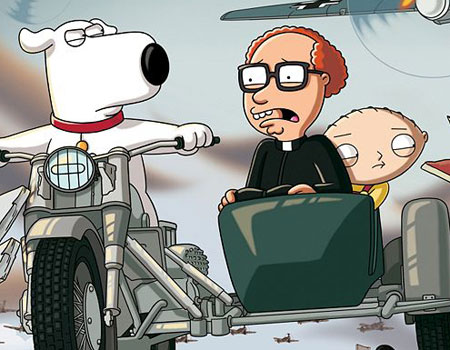 Foxnews.com posed the question to its audience whether the latest Family Guy episode went to far by inferring McCain/Palin ticket was akin to the Nazi Party of WWII. In the episode, two of the characters, Stewie (a talking baby) and Brian (a talking dog) are transported to Poland during the Nazi invasion of World War II. In one scene, the characters beat up and steal the uniforms of two Nazi officers. Stewie looks down at his Nazi uniform and notices a McCain/Palin campaign button attached to its lapel, remarking “Huh, that’s weird.”

Fox also reported that the show’s creator, Seth MacFarlane, is an ardent supporter of Barack Obama. “MacFarlane has given thousands to the Democratic presidential nominee and the Democratic Party, and even spoke at an Obama rally in Ohio earlier this month.” According to Foxnews, a representative of the show defended the episode by arguing that Family Guy has always used biting satire and provocative concepts to spin its humor. The rep further claimed that the show was an “Equal Opportunity Offender.” Within a couple of hours, Fox had received thousands of comments from the public. It is worth noting that the show, Family Guy, has been cancelled twice by Fox. It is disappointing to me that it is on the air.

What is really going on here is that Seth MacFarlane has a clear political agenda and is hiding behind his Family Guy characters in order to advance his political preferences. Rather than just come out use his characters to support Obama, he slams McCain & Palin in an ugly disgusting manner. Not only does MacFarlane hide behind Stewie, he further cloaks himself behind the concept that the show is simply using biting satire and being provocative. There are limits in being provocative–certainly these limits apply to general media and television. Even the U.S. Supreme Court places limits on the “provocative” use of the First Amendment. I’m hard pressed to find any humor whatsoever in this expression. To infer that John McCain’s political policies, positions, and ticket are similar to the Nazi Party is beyond understanding. What is the basis or foundation for the comparison? The inference is a very poor attempt at satire however, it is definitely provocative and insulting. Indeed it is sad that MacFarlane uses the concepts of satire and being provocative as cowardly excuses for bad taste and poor judgment. The doleful effect of MacFarlane’s cowardice is that it opens the door to the other side to use the same extremist like rhetoric in media or elsewhere to justify lame insults toward his champion.

With respect to the claim that the show is an “Equal Opportunity” offender, should viewers expect, if not demand, that the same disgusting jab be taken at Mr. Obama? I look forward to see exactly how MacFarlane will incorporate the same biting satire in a provocative episode dishing some of his unique humor at Obama. I have a suggestion for you Mr. MacFarlane. I’m sure you could achieve the same level of success in an episode where Stewie and your talking dog take a vacation trip to Iran. No doubt that during the episode, Stewie might be doing a little research on the topic of “gay life” in Iran. The pair will of course meet with Ahmadinejad as his dinner guests. The affair will be a “white tails” event and Stewie will euphorically exclaim, “that’s COOL” when he notices the Obama/Biden campaign button on Ahmadinejad’s tuxedo!

One thought on “Seth McFarlane – Why Hide Behind Your “Family Guy”?”